Have you seen the Marvel movie, Dr. Strange? If you are familiar with near-death, out-of-body experiences, and astral projection you might have noticed some very interesting topics and events within the movie.
At multiple moments in the movie Dr. Strange gains awareness of the Astral dimension and learns to interact with the dimension using mental powers. The startling aspect of the scene is how accurately they depict the experience based off of real stories of astral projection.

Here is an explanation from Marvel on the Astral dimension and its characteristics:
When Stephen Strange was injured as a result of his conflict at the New York Sanctum, he stumbled through a portal into the Metro-General Hospital. There, Strange left his physical form by simultaneously assuming the astral form and entering the Astral Dimension, rendering his body unconscious. During this time, he helped Christine Palmer perform surgery on him by re-emerging in the regular universe in his astral form. Palmer was shocked by this stunt and assumed Strange was dead at first. However, he was followed by the astral form of Lucian, one of the enemies he had just overcome.

In Marvel, the Astral Plane is the realm of minds. Telepaths are able to access the Astral Plane by projecting their mind onto this realm, more commonly known as Astral Projecting, thus also allowing them to enter the minds of others. 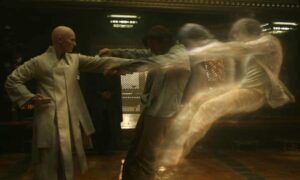 Check out the movie and post your thoughts on the Astral dimension in Dr. Strange.